In contrast to metal halide, incandescent and fluorescent sources, LEDs radiate very little heat that can cause damage to sensitive objects or discoloration of fabrics and finishes. Reduced heat generation also brings potential savings on air-conditioning costs. HID retrofit lamps from GREEN CREATIVE provide the right amount of light without all the heat from traditional metal halide lamps.

Due to their small form factor, LEDs present the best of both worlds for lighting design. They can be used to mimic the directionality of PAR, BR and MR lamps or be combined to duplicate the omnidirectional nature of fluorescent and incandescent sources.

Unlike Fluorescent lamps that may have up to certain percentage of mercury, LED lamps are completely mercury free and dramatically reduce their environmental impact upon disposal.

Unlike fluorescent lamps that take time to warm up and come to full brightness or metal halide lamps that need time to cool down before they can be restarted, LEDs are near full brightness almost instantly and can be rapidly cycled without any harmful effects the rated lifetime or light output.

The LED chip or die cannot be used independently but must be packaged into a lighting system before it can be used in an application. When referring to LED lighting, we usually refer to the LED package. The main package components are:

Semiconductor die or chip – the central component of the package that creates light. LED chips are only produced by a handful of integrated companies such as CREE, Bridgelux, Lumiled in the US, Osram in Germany, Nichia or Citizen in Japan or Seoul in Korea…
Phosphor layer – placed on top of the blue LED chip to achieve white light
Heat sink – which transfers the heat away from the chip
Electrodes – anode and cathode that transfer the current from the device to the package
Bond wire – which will link the electrodes to the die or chip
Primary lens – which will control the beam 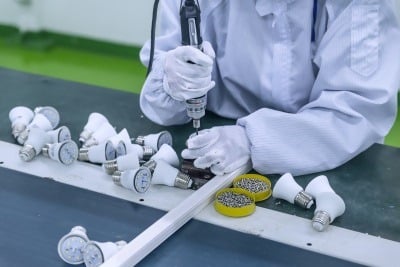 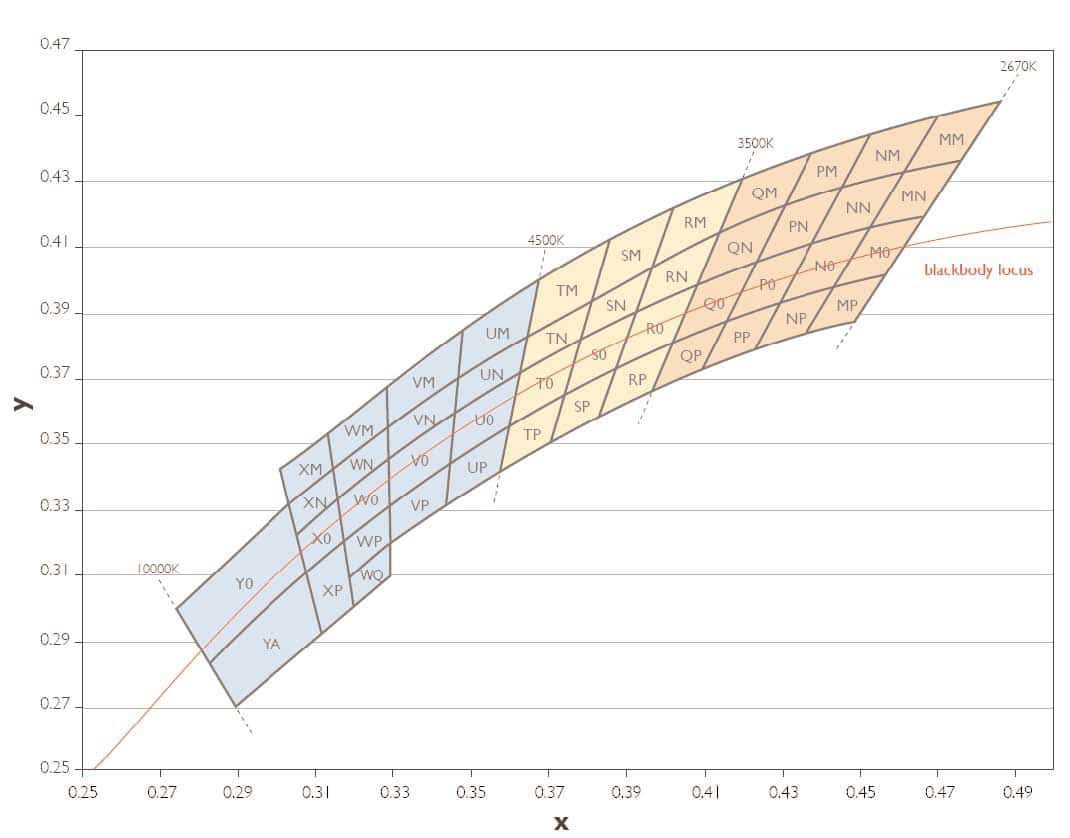 White LEDs are formed when a blue LED chip is covered with a layer of phosphor during the packaging process. The tiniest variation in the phosphor layer and packaging assembly will lead to different color temperature and brightness. Currently, creating a batch of LEDs at a uniform color temperature and brightness is a big challenge because it is not possible to perfectly control LED properties during mass production. Thus, the binning of LEDs is a practice used by LED manufacturers to manage the variation of LED performance and color at the end of the mass production process. Each LED will be automatically sorted in a different bin based on its brightness and color temperature (See left image). It is then up to the lighting manufacturer to select the bins according to its needs. GREEN CREATIVE uses a tight binning selection for each LED type to ensure consistent color and brightness of each batch.

LED (Light Emitting Diode) is a semiconductor diode. The chip or die consists of different layers of semiconducting materials. When current is applied, a negative layer of electrons meets a positive layer with holes at a junction (Fig. A). When an electron takes the place of a hole it drops to a lower energy level (Fig. B) releasing energy in the form of a light photon (Fig. C). This process of creating light is known as Electroluminescence. Different semiconductor materials emit different colors of light. White LEDs used in our product are created by adding a phosphor coating on a blue LED chip. 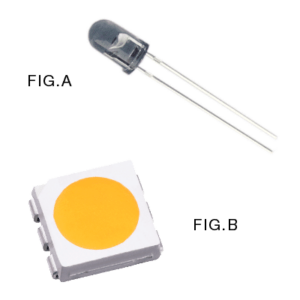 There are thousands of LED packages that come in different shapes, power and size. However, we can distinguish three main LED types: 5mm LED or THT, SMD Low Power LED and SMD High or Medium Power LED. THT – Through Hole Technology LED (Fig. A): The component wire leads or “legs” goes through a hole in the PCB and is soldered at the back. THT LED, also known as 5mm LED, is the earliest type of LED that was integrated in electronic devices. It is the cheapest LED available, but offers very limited lighting output and lumen output depreciates rapidly. SMD – Surface Mount Device LED (Fig. B): The component is soldered on the surface of the PCB allowing for better heat dissipation and higher component density. Both sides of the PCB can also be used, reducing the PCB’s overall size. Assembly of SMD LED is automated using an SMT (Surface Mount Technology) assembly line for better productivity and quality control.
GREEN CREATIVE exclusively uses SMD Medium and High Power LEDs which offers both high performance and longevity needed for demanding lighting applications.

Thanks to the invention of the white LED and the enhanced lighting output improvements it provides, LED lighting has become a relevant alternative to traditional light sources, such as incandescent, fluorescent, HID and halogen.
The “Haitz law” based on observations of Roland Haitz, is the LED equivalent of the “Moore’s law” for transistors in IC. It shows that for every 10 years, LED package lighting output will increase by a factor of 20, while the cost per lumen will drop by a factor of 10.
In order to take advantage of such improvements in lighting performance and costing, LED lighting manufacturers must master a specific set of competencies and processes (see LED competencies section).